The 8th IMG held in Italy

The Opening Ceremony of the 8th IMG took place in the “CarraraFiere” located in Carrara, Italy on 31st Oct.

In the opening ceremony, the world-famous the DPR Korean Taekwon-do Demo Team played amid cheers and praises of thousands of audiences.

The Taekwon-do demo performance showed the spirit, excellence and power of Taekwon-do, the national martial art of Korean people and swept the opening stage with joy and passion.

Chairman of Finance and Marketing Commission: Mr. Kim Yong Il, Chief Director of International Martial Art Fund.
The Congress admitted the World Pahuyuth Federation and World Federation of Jujitsu as associated members.
The Congress discussed the issue of the venue of the 9th IMG.
Russia, Uzbekistan and Germany applied for the Next IMG venue. 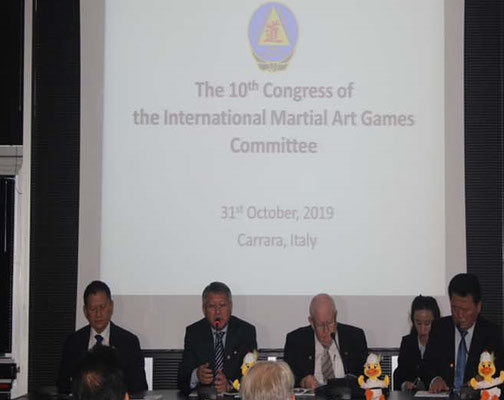 Cheboksary is a capital of Chuvashia Republic, Russia.
The population of the city is about 50 00 00 and it is a river port city where the river Volga and river Cheboksary flow together.
The city began to be built up before 1469 and has historical buildings between 17 and 19 century including the Palace in 1657 and the religious houses.
Chevoksary has enough experience in terms of organizing the high level sports and culture events including the European Championship on track and athletes field and World Cup free-style wrestling among women and sufficient condition of stadium and hotel to organize the international event.
Chairman of the 9th IMG Organization Committee (OC) is Mayor of Cheboksary, Russia, host city and will be consisted of the officials of the City government related.
They are ready to prepare the event in close contact with the IMGC and trying to provide the intended participants to show their skills to the full.
All the participants shall experience the Russian culture, customs and history in the beautiful Cheboksary city located in the shore of river Volga.

The Commemorative Meeting of 20th anniversary
of IMGC foundation


The commemorative meeting of 20th anniversary of International Martial Art Games Committee (IMGC) foundation was held on September 17 at the Sci-Tech Complex in Pyongyang.
It was attended by Vice-Premier, Prof. Ri Yong Son, President of IMGC & ITF, Executive Board members, about 40 delegates from 14 countries and about 100 members of IMGC headquarters.
Vice Premier in his congratulatory speech congratulated martial artists on the 20th IMGC founding anniversary on behalf of the DPRK government, saying that since its foundation the IMGC has written a proud chapter in the history of the world’s martial arts for the building of a new peaceful world under the ideal of friendship, cooperation and development.
The DPRK government will extend full support and encouragement to the efforts of the IMGC, he said, expressing the belief that the event would be an important occasion for bolstering up relations of friendship and cooperation between martial artists of different countries and developing the committee.
After that Prof. Ri Yong Son, President of IMGC, Dr. Rajendran Balan, President of Indian Martial Art Games Federation, Prof. Jonathan Makiling, President of International Jendo Federation delivered speeches.
They mentioned about the successes achieved by the IMGC in the work of founding and strengthening the IMGC organizational base, and the international martial art games turned into the worldwide event for the last 20 years.
The speakers also said that they have to expand IMGC as a stronger control organization and expressed their resolve to work harder to further develop the committee into an organization spearheading the world martial art movement.

The work with the international sports organizations

The Information Package for the 8th IMG